One of my preferred point of view — who knows why … Blue sky and empty streets, perhaps ? The marriage of colors ? Everything ?

Where I discover that within the night, someone had stolen the stained glass !

Because I have a friend who is a fanatic of stained glass, and we might be a few hundreds people who send him pictures of old (or even recent) churches and stained glass, from all over the world.

Welcoming visitors with simple text —and worse, in French!— this site may seem boring at first glance, but please take the time to click here and there, and you will discover a collection of thousands of beautiful pictures.

When I travel, I do my best to describe what I see for those who are not there, my friends and family in France, or anyone interested in my subjects.

Leeds seems to be in perpetual reconstruction, and among the used machines, some vehicles or earthmoving equipment show an unusual color, emerald green. So it seems natural to be tented to take pictures of their mechanical ballets.

In a strange way, the emerald green color exists only for my eyes, but becomes blue for my camera —either in the EVF and in the picture— as well as my smartphone, despite its Leica rear lens. Most of the time …

At start, I only used my camera to take photos. But when I discovered the blue color in place of the expected green, I thought my camera —a recent but second-hand acquisition— had a mismatch with colors, and I started to prefer my smartphone to the camera.

Few days ago, I took a picture of works near the Leeds Art Gallery with my smartphone, and on the final picture, the emerald green had turned blue, once more. Only then I started to wonder how this ‘magic’ emerald green was doing to make it impossible to capture, even for the Leica lens of my camera.

And I gave my confidence back to my camera, unduly suspected of color incompetence.

Things might have ended there, and the mystery remained insoluble, but sometimes I am lucky, and once more yesterday … I was coming back from Merrion Center with a few purchases, and I saw a nice group of engines of the ‘magic’ color, and I took a picture, not for the color, but for the group itself, and …

I don’t plan to explain the mystery of Leeds’ emerald green. But at least I’m able to show it to friends, family, and curious people worldwide.

It’s enough for me — for the moment !

PS: And yes, I confess that here, I have used a lot Google Translate. Because it was a very technical subject, far beyond my knowledge on public works, but I really wanted to show the ‘magic’ color to everyone. Ouf! It’s done!

Many public places are closed, streets are empty, and so on. As an elder client of the Accor Group, for a few days I have taken the habit to go to places I like to take a coffee —like the Mercure hotel in York Place— to thanks people who continue to go at work and do their job, despite their fear.

Two books have marked my youth: ‘Airport’ and ‘Hotel’, both written by Arthur Hailey. I have satisfied my love for airports in working almost ten years —nine years and a few months, exactly— for an air freight forwarder company at Roissy Airport in France (which became later an affiliate of Burlington Air Express, itself a member of the Pittston Group, but that is a different story).

Still today, I feel sadness because I have never found a way to enter the hotel industry. That is probably why I am so fond of the Accor Group: their quality of service meet my own requirements about well done jobs.

Maybe I can’t help. But it seems important to me to thank people doing their job, to say them they are not alone, their clients think at them — because if I were in their place, it might help me to know I am not working only for the money — to know that what I do is meaningful for the clients.

And before I forget — I have wondered if I was a client or a customer of the Accor group, so I asked Google for it.

So, I am a customer —amongst many other ones— at the Kirkgate Market, there is no shame at it, I am ok with this.

But Accor’s employees are highly specialized professional people, and, do you want to know my opinion?

I am very proud to be a client of the Accor group. :^)

I have schooling every weekday morning from 9.30 am up to 1 pm, then I’m free for whatever I decide to do — either explore the city or try to do useful things, most of the time.

So, on Tuesday I went to a Boots Pharmacy to ask for a free exam of my ears, which was done immediately, then I got an appointment to clean my ears on next week.

We are Wednesday, and this evening, I went to Central Station to ask if I could change my First Month subscription —on paper— for a First Bus subscription —using smartphones, as I saw many people do— but it wasn’t possible, as they are two different subscriptions, so I have to use my paper one till the end, in three weeks, and then move to the First Bus system. Agreed!

I had wondered why they don’t give anymore some cover where to range the two-parts paper of the First Month subscription, I have understood: paper has become an obsolete technology. And I agree — I prefer by far seeing trees in the campaign than paper rolls in print factories.

Without being an expert, I am aware of the subject: in my youth, I worked two summers for The Figaro factory at Saint-Herblain, near Nantes, and I loved that job (cleaning the presses, from 6am up to noon — I learnt to read the news for free on the cylinders), but nowadays, I prefer trees on their feet.

Then … What will I do tomorrow evening? I have no idea yet, sorry :^)

Or maybe — going to thanks the ‘Visit Leeds’ shop (just besides Leeds Art Gallery on Victoria Square) because they made me know my current school. Where I’m happy to work at improving my English.

And schooling again at 63, when you are oversized, partly deaf, and slightly authoritarian on the edge —due to the certainty of my knowledge— is a real challenge !

And as I was in West Yorkshire, England, United Kingdom and so on, I started my letter with a (virtual) thunderous “Hi, mom!” in English.

Of course, on next paragraph, I explained it was a joke, because I was —I am— in England now, in a city named Leeds from which I have become in love at first glance, so I’m not sure I would agree to go back in France now.

I’m happy I was able to send her a (large) nice postcard, with four pictures of Leeds on front side — postcard found at the museum near the City Town Hall, if I remember well.

But as I haven’t thought to take a snapshot of the postcard, I give you a picture coming straight from my smartphone, without any change at all.

A really nice picture, isn’t it? Hope I could make such beautiful ones with my (semi-pro) camera …

This church is beautiful, really.

And I won’t write anything more today, as I’m starting to get really tired. Sorry! See you back soon? Thanks :^)

I’m not sure I can afford London, which is reputed expensive.

On the other hand, even whether my spoken English is slightly better than I thought, it’s not that good. I hear poorly, I pronounce poorly, and often I need people repeat several times what they say before I understand the meaning. When I understand — not always.

So, I have decided to go slightly away from London, to force me to face reality, and Leeds seems a nice idea for the challenge.

‘Why Leeds?’ could you ask. ‘Why not Leeds?’ might I reply. In fact, there is a reason for Leeds rather than any other place in the world: Leeds is the closest place with a railway station and hotels of the Accor group from another place where somebody I crave to meet lives. And that’s enough to say, if you agree.

Sadly, I might have to go back to Vierzon on next month — just a quick round trip, but it has to be made before May. My travel was poorly prepared (my fault), and I miss some papers I need to bring my bank agency closer to me, not to mention finding any accommodation here.

I can’t get tired of this vision, nor of the dialogue I imagine at arrival.

I have been away too much, it was enough for me to reach Saint Pancras to understand how much I have missed England since 2014.

My heart has remained enclosed in the memory of clothes the couple of Paul Day was covered in (January? February?) 2014, to celebrate I don’t remember which event.

Clothes were removed, but fragments of my heart remained there, forever glued to the statue, so my very first pictures of England were for them.

In fact, I don’t know if that is the traveler or the one who accommodates who is in charge to pronounce the ‘Welcome back, England!’ sentence.

Or ‘Welcome back, Traveler!’? — Another lacuna to be filled up.

Just a few words to advise (the universe) that I take the Eurostar tomorrow morning, even if I plan to spend only half an hour in London, for my correspondence from Saint Pancras to Kings Cross.

Due to rates of locations in London, I move away a little bit (compared to the size of the universe), and go towards the Yorkshire — the West Yorkshire, at least.

Where a simple ‘Welcome, Yorkshire!’ will be due, as it won’t be at all a comeback :^)

In January 2014, I went to London. I came from Paris, France, and after the rails landscape, my first glance of the city was the large clock above the hall at Saint-Pancras Railway Station, and this statue of the England Lady welcoming a European traveler (back home?) from the continent. 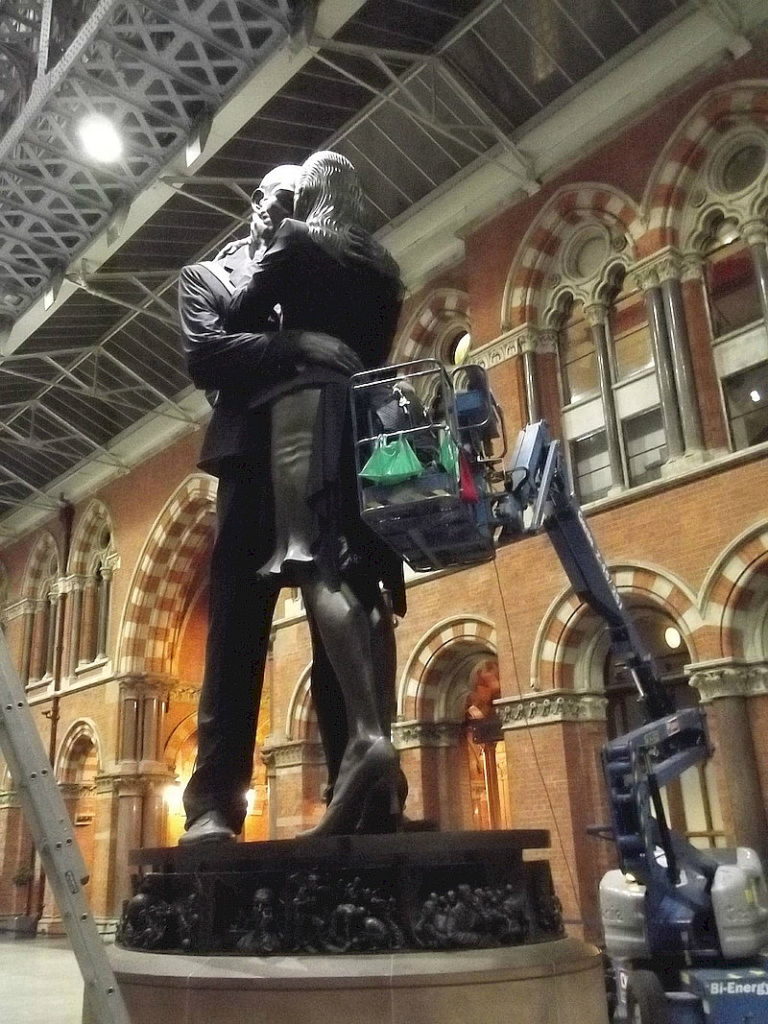 [I took this picture few days later: by the way, I was there night after night (trying not to get asleep) while tailors worked to dress the giant couple for I do not remember which event.]

Due to the Brexit, will ‘The Meeting Place’ become the ‘goodbye forever’ room?